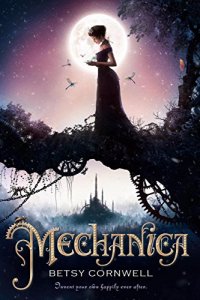 It cannot be denied that Cinderella has been very popular lately. There was a live action film released this past spring, and I have also recently read A Curse of Ash and Iron, which is also a steampunk retelling of Cinderella. That said, I was very excited to see Mechanica’s interpretation of the classic fairy tale.

Mechanica is a young adult novel written by Betsy Cornwell. This is the story of a young woman named Nicolette who lives with her stepmother and stepsisters. She is not treated as an equal, and is forced to work as a servant in her childhood home. When she discovers the inventor’s workshop that belonged to her mother, Nicolette sees a new world full of possibilities.

Nicolette does not dream of marrying the prince; rather, she dreams of attending the Exposition Gala with her inventions so that she can secure financial independence for herself, and leave her stepmother’s house.

What really made Mechanica interesting was the political situation in the land of Esting. Several years before the story begins, the Queen and her oldest son are killed by Fey assassins. Trade had flourished between the two lands, but the brutal killings leave the king with no alternative but to expel the Fey from the land of Esting, seal the borders, and sequester his younger son- the new heir. Some of the more tender moments occur between Nicolette and Mr. Candery, their half Fey housekeeper. She knows that he isn’t a bad person just because of his origins, and he serves as her only comfort after the death of her mother, and then later, her father. Mr. Candery’s dismissal is the catalyst for Nicolette’s transformation from dutiful daughter to household servant.

I enjoyed reading Mechanica. I loved that Nicolette was so clever. She uses her intelligence rather than good looks to get ahead in life. I also loved that when she ventures out of her home, she makes friends with a young man and woman at the town market. Placing more of an emphasis on friendship rather than romantic relationship is what we should be teaching our girls. Another aspect that I really appreciated is that Nicolette takes her friend Caro’s feelings into account when making an important decision.

I would absolutely recommend Mechanica. As I mentioned, I recently read A Curse of Ash and Iron, and I think both books stand well on their own. There is room for many interpretations of Cinderella. Mechanica shows that young women can be technologically adept, and that friendships are rewarding. Mechanica is the story of standing up for what you believe in, and discovering who you are and who you want to me. I am looking forward to reading more of Betsy Cornwell’s books.