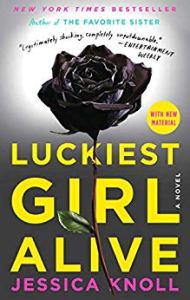 I first heard about Luckiest Girl Alive a couple of months ago, and I requested it from the library network. Luckiest Girl Alive, the debut effort of Jessica Knoll, seems to be one of the most popular books of the summer because I waited for over a month for my copy to arrive.

As the story begins, we are introduced to Ani FaNelli, who writes sex articles for a fictional version of Cosmopolitan. She’s engaged to the handsome son of an American blueblood family, and everything should be perfect, but it’s not. Ani has a dark side to her personality that lurks so close to the surface; the possibility of her revealing her inner monologue seems like it could happen at any point.

One could argue that her personality was shaped by what happened to her as a freshman at The Bradley School. After having gone through what she endured, it would be almost understandable that she would be permanently affected. But one could also make the argument that the dangerous side to Ani’s personality was always there.

The story alternates between the present day, and Ani’s freshman year at Bradley. Back then, she was TifAni, and was desperate to fit in and to be liked by the popular crowd. Her efforts to gain their attention are acknowledged, but it is not what she expected. The school environment is toxic, and nothing is being done about it.

Ani is not a particularly likeable protagonist. I’m sure she would cringe at the connection, but she’s a lot like Holden Caulfield. She has contempt for phoniness; her mother’s cherry red BMW is not a status symbol, but rather a gauche parody of one. But Ani is one of the most insincere characters in the story. Despite being rather unlikeable, Ani is endearing. She’s crafted a flawless exterior, but deep down, she is still afraid of rejection. She has achieved everything that she thought she wanted, but having to face her buried feelings about what happened at Bradley causes a shift, and Ani begins to re-evaluate her priorities.

I would absolutely recommend Luckiest Girl Alive. Ani teases the reader by slowly revealing what happened to her in the past. You might think you’ve heard the worst of it, but she is only getting started. Ani’s perfect poise suggests that she has moved on from her high school years, but she is not going to be able to move forward with her life if she doesn’t face her past.

One thought on “Luckiest Girl Alive by Jessica Knoll”